Hurricane Dorian roared into the Bahamas as a Category 5 hurricane and it has caused widespread damage across the region.

Here's Dorian At a Glance from The Weather Channel:

Hurricane Dorian has stalled, continuing its siege on the northwestern Bahamas, but will track dangerously close to a long swath of the East Coast from Florida to Georgia, South Carolina, North Carolina and southeastern Virginia this week.

Dorian's intensity has backed off ever so slightly from yesterday's peak and is now a strong Category 4, as it has finally undergone an eyewall replacement, common to all intense tropical cyclones during which its intensity diminishes as a new outer eyewall forms, chokes off its former inner eyewall and contracts inward. Despite that, it is still a formidable hurricane, and will remain so over the next several days.

Dorian's forward speed has slowed to a virtual stall near Grand Bahama Island.

Squalls from the outer periphery of Dorian have also reached the southern Florida Peninsula. Sustained tropical storm-force winds arrived at Juno Beach, Florida, early Monday afternoon. Outer rainbands are pivoting into Florida, each with the potential to produce wind gusts up to 50 mph. 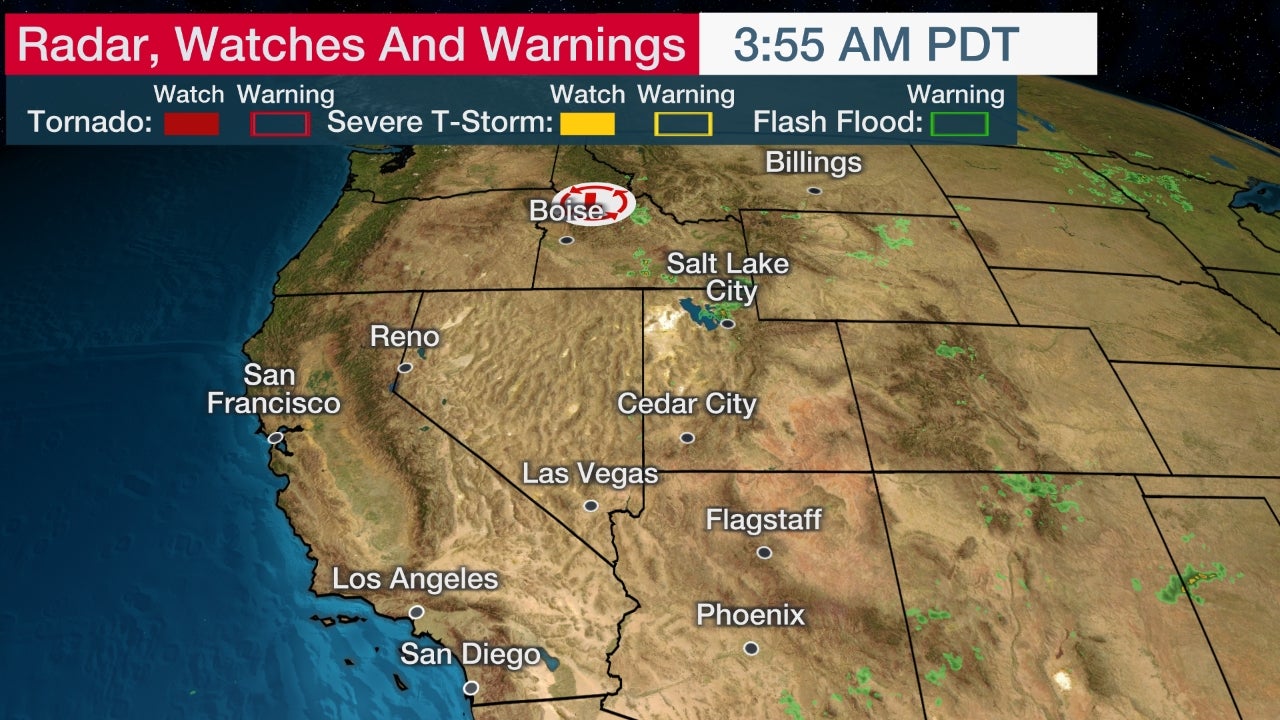 A hurricane warning remains in effect for Grand Bahama and the Abacos Islands in the northwestern Bahamas, including Freeport, Grand Bahama.

Hurricane warnings mean that hurricane-force winds (74-plus mph) are expected somewhere within the warning area, generally within 36 hours. Preparations to protect life and property should be rushed to completion.

Storm surge warnings mean there is a danger of life-threatening inundation, from rising water moving inland from the coastline, within the warning area during the next 36 hours. If you live in an area prone to storm surge, be sure to follow the advice of local officials if evacuations are ordered.

A tropical storm warning has been posted along the east coast of Florida from north of Deerfield Beach to Jupiter Inlet, meaning tropical-storm-force winds are expected within 36 hours. This warning includes West Palm Beach.

A tropical storm watch is in effect for portions of Florida's east coast from north of Golden Beach to Deerfield Beach, as well as for Lake Okeechobee. This watch includes Fort Lauderdale and Hollywood, Florida.

Tropical storm watches mean winds of 39 mph or greater are possible within 48 hours. 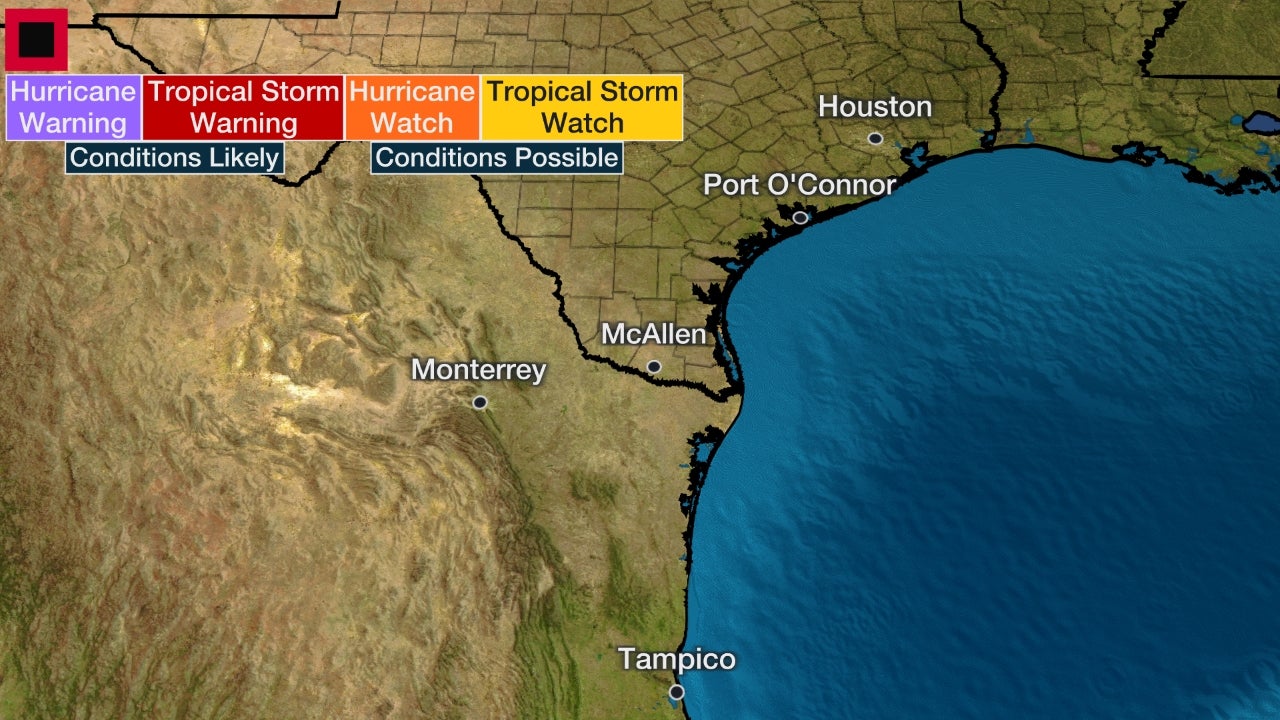 Monday: Dorian will still be hammering the northwestern Bahamas as it crawls slowly. Bands of rain and strong winds may affect parts of Florida. Tropical-storm-force winds (39-plus mph) are expected in the tropical storm and hurricane warning areas of eastern Florida, with hurricane-force winds (74-plus mph) possible as soon as late Monday night in the hurricane warning area. How strong the winds will be depends on how close the center of Dorian is to the Florida coast, which is still uncertain at this time. Battering waves, coastal flooding and beach erosion will increase along the southeastern coast of Florida.

Tuesday: Dorian will still be hammering the northwestern Bahamas, but conditions should slowly improve by night. Bands of rain and strong winds will still affect parts of Florida. Hurricane-force winds are expected in the hurricane warning area of eastern Florida. Coastal flooding and beach erosion will spread northward along the Florida coast.

Wednesday: Dorian is expected to move north, then northeastward near the coasts of northeastern Florida, Georgia, and southern South Carolina. The exact track is very uncertain, ranging from a track far enough offshore to keep hurricane-force winds away from land to a landfall anywhere in this zone. Storm-surge flooding, damaging winds and flooding rain are all possible in these areas.

Thursday: Dorian is expected to pass near the coasts of northeast South Carolina and North Carolina. The exact track is very uncertain, ranging from a track far enough offshore to keep hurricane-force winds away from land to a landfall anywhere in this zone. Storm-surge flooding, damaging winds and flooding rain are all possible in these areas. Some impacts from wind and coastal flooding could spread as far north as the Virginia Tidewater and the southern Delmarva Peninsula late.

Friday-Saturday: Dorian is then expected to race off the Northeast Seaboard but could track close enough to bring rain and some wind to the Virginia Tidewater, Delmarva Peninsula, Nantucket, Martha's Vineyard and Cape Cod before it heads toward the Canadian Maritimes by the weekend.

(The red-shaded area denotes the potential path of the center of Dorian. It's important to note that impacts – heavy rain, high surf, coastal flooding and winds – with any tropical cyclone usually spread beyond its forecast path.)

The reason for this is the upper-level high-pressure system that had been steering Dorian west has fizzled, stalling Dorian temporarily in an environment without a steering wheel.

Over the next day or so, a gap between upper ridges east of Dorian and over the southern Plains of the U.S. should allow Dorian to turn north. Late in the week, a southward dip in the jet stream approaching from the Great Lakes should grab Dorian and accelerate it toward the Canadian Maritimes. 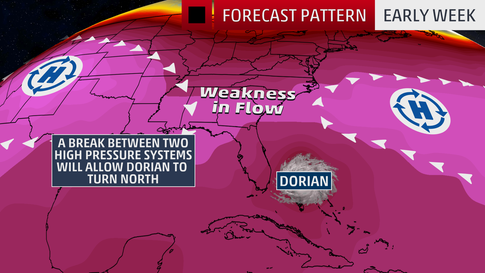 High pressure aloft has now fizzled north of Dorian, leading to its stall. A turn to the north is then expected as a break between high-pressure systems opens up. Where that northerly turn occurs is uncertain and critical for impacts.

The myriad of track possibilities range from a Florida landfall and track northward through part of the Florida Peninsula to a landfall somewhere in the Carolinas to a long scrape of the Southeast coast without the center ever moving ashore to a sharper northeastward turn well offshore.

Regardless of its exact track, Dorian is likely to be a dangerous hurricane this week near the Southeast coast. Residents should have their hurricane plans ready to go and follow the directions of local emergency management.

As we saw with Hurricane Matthew in 2016, a hurricane doesn't have to make landfall in an area to produce significant impacts.

On Grand Bahama Island, a life-threatening storm surge may cause water levels to be as much as 18 to 23 feet above normal tide level in areas of onshore winds. Near the coast, that storm surge will be accompanied by large, destructive waves.

Damaging hurricane-force winds will persist much of Monday, perhaps into Tuesday in the northwest Bahamas.

Rainfall totals of 12 to 24 inches are expected in the northwestern Bahamas, with isolated amounts up to 30 inches, which may cause life-threatening flash flooding, the National Hurricane Center said. The central Bahamas can expect an additional 1 to 3 inches, with isolated totals up to 6 inches.

Larger swells and increased battering waves generated by Dorian are beginning to arrive along the Southeast coast from North Carolina to eastern Florida and will persist for several days.

This will lead to increasing beach erosion and coastal flooding, particularly around times of high tides, which are generally around 10 to 11 a.m. and p.m. each day.

These impacts will occur regardless of how close Dorian's center tracks or whether it ever moves ashore in any part of Florida, Georgia or the Carolinas.

Filed Under: hurricane dorian
Comments
Leave A Comment
Back To Top
Light Up Acadiana in 2020 — Show Us Your Holiday Displays